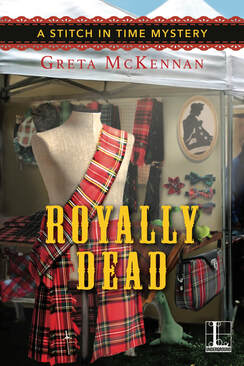 A seamstress who specializes in historical detail, Daria Dembrowski is happy to welcome the Highland Games to town—it’s all fun and games until someone gets “kilt.”

Daria’s roommate, Aileen, plays guitar in a metal band, but one of her bandmates is branching out musically and asks Daria to craft a kilt for an upcoming bagpipe competition. The locals in Laurel Springs, Pennsylvania, are really looking forward to the Highland Games, and the Scottish regalia needs to be just right.

Then one of the athletes collapses during the event, a victim of poisoned whiskey. As suspicion spreads and the police turn their attention to Aileen, Daria vows not to let the real killer get off scot-free . . . 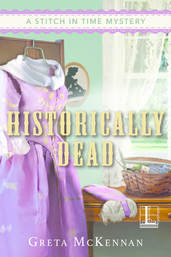 ​Seamstress Daria Dembrowski must find a historically-minded killer before the fabric of her peaceful town rips wide open . . .

When the reality show My House in History comes to Laurel Springs, Pennsylvania, savvy seamstress Daria Dembrowski sees a business opportunity. The show follows two elderly sisters’ quest to restore their colonial mansion, and that means a heap of work for a seamstress who specializes in historical textiles. Although one of the old women is a bit of a grump, Daria loves the job—until she discovers one of the researchers dead, and the whole project threatens to unwind.

As a series of historical crimes pile up, from a stolen Paul Revere platter to a chilling incident of arson, Daria must find the killer quickly, for her life is hanging by a thread.
UNIFORMLY DEAD  A Stitch in Time Mystery #1

Historical seamstress Daria Dembrowski has her work cut out for her as she searches for a killer’s pattern . . .

Daria has come up with a brilliant new plan to expand her seamstress business beyond stitching wedding gowns—historical sewing. And with Civil War re-enactors setting up camp in her hometown of Laurel Springs, Pennsylvania, she has plenty of opportunities, including one client portraying a Confederate colonel who is a particular stickler for authenticity.
​
But soon the small-town peace starts coming apart at the seams as an antique doll is stolen from a Civil War exhibit and the cranky colonel is found impaled by his own bayonet. When Daria’s brother is suspected of the theft and a bridal client’s fiancé is accused of the murder, Daria is determined to untangle the clues to prove their innocence. She needs to get this case sewn up fast, before the murderer re-enacts the crime and makes her history.